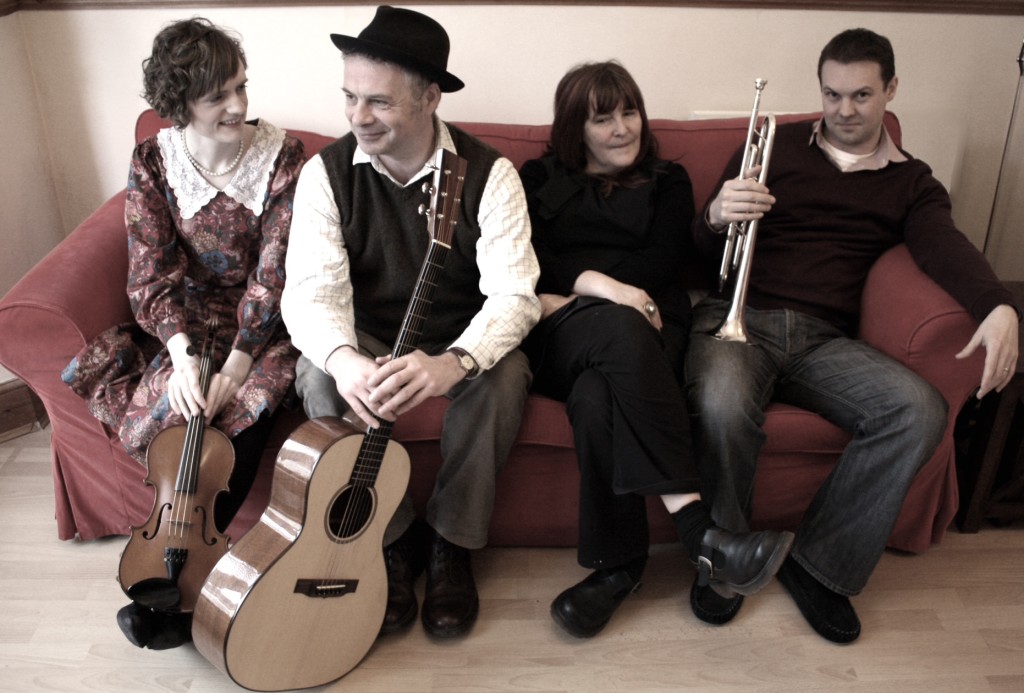 A collision between mechanical time, seasonal time, life time, generational time, cultural time, poetic time, no time particles of eternal love…
fernhill, from Wales, make new, beautifully lyrical and intense folk music which they have played to audiences all over the world. Central to their sound is the voice of Julie Murphy, described by Time Out as “a must hear, must see singer”, her fans include music legends like Robert Plant and Danny Thompson, both of whom have recorded with her. In Fernhill she is surrounded by wonderful musicians; Ceri Rhys Matthews whose percussive and open guitar playing underpins their music is also a fine piper and flute player is a key figure in the  renaissance of Welsh traditional music. Tomos Williams is a trumpet player from Aberystwyth whose subtle and inventive improvisations have contributed hugely to Fernhill’s sound. His main musical influences are be-bop and hip hop. Christine Cooper is an exciting young folk fiddler from Tenby whose fresh and soulful playing has brought a new energy to the group.fernhill’s international appearances include Lorient interceltic festival, Festival De Cornouaille, Celtic Harmonies, Quebec, Telemark, Kaustinen, major concerts in Athens, Rome, Brussels and Tokyo plus British Council tours of Southern and East Africa, Vietnam and Poland.

Intimate enough with tradition that they are unafraid to stretch it’s boundaries they have appeared at UK festivals as diverse as Greenman, Womad, the Oxford folk festival, Whitby Musicport and Glasgow’s Celtic Connections. The group recently performed acoustically in the famous Great hall in Dartington as part of the Home festival.
fernhill from wales have been making beautiful music for years now, and i’ve loved every album i’ve heard. it’s folk music but not as we know it; julie’s voice is haunting and incredibly soothing, with tales of sadness and beauty in her voice. and i got to finally see them play in brussels over the weekend! in a weird old underground theatre! and it was great. so simple it was stunning

the band at the heart of the welsh renaissance
mojo

fernhill are a band everyone should know. they are the antithesis of bands of the new generation of generic music making, because this music actually means something. this music has soul, it is intelligent, original, it is performed musically and beautifully. this music inspires me, confuses me, stretches my ears, and perhaps better than any words can describe, it gives me goose pimples
amazon aug 2003

in a fair world fernhill would be as big as any “world music” act, and their cds must haves for even casual music fans. the world, alas, is not fair. one of the great bands on the planet
howard wolfson – gotham acme – new york times